Police detained former Likud MK Yehudah Glick for questioning on Saturday night after a man he said was a Palestinian hitchhiker he was transporting to Jerusalem turned out to not have proper documents to enter Israel.

Glick, a longtime advocate for Jewish rights on Jerusalem’s Temple Mount, was suspected of trying to intentionally smuggle the man from the West Bank, even though the former lawmaker said it was he who had told Border Police officers at a checkpoint to inspect the papers.

Glick’s wife, Hadas, said the couple spent the weekend in the settlement of Har Gilo.

When they headed back, they met a man who said he was from the nearby Palestinian village of Walaja and asked for a ride to Jerusalem’s Malha neighborhood. Hadas Glick told Hebrew media that the man told them he had the necessary documents.

She said that at the checkpoint, the officer initially told them they could continue, but Glick requested that the validity of the hitchhiker’s documents be inspected.

When the papers were found to be faulty, the officer turned on Glick, arguing that by law, he should have let the man out of the car before the checkpoint so that he would have instead approached it on foot.

Under Israeli law, a driver found to be transporting an undocumented foreigner can be jailed for up to two years. 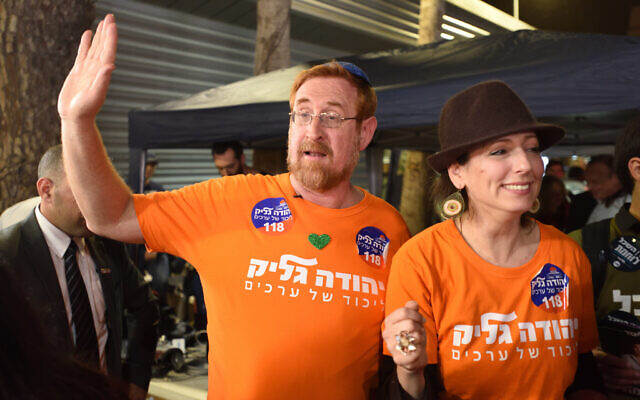 MK Yehuda Glick and his wife Hadas Disin attend the primaries for the Likud party in Tel Aviv on February 5, 2019 (Gili Yaari/Flash90)

The officer told Glick to enter a nearby police vehicle. When he refused, officers handcuffed him and took him for questioning at a Border Police base in Atarot.

After several hours, he was released on a NIS 5,000 ($1,520) bail. The Palestinian man was taken to a detention facility at Ofer Prison.

“It’s a really horrible feeling,” Hadas said. “We acted as any human would.”

Glick, 55, a United States-born religious Zionist, was a lawmaker for the ruling Likud party from 2016 to 2019. He was elected as the representative of West Bank settlements, but quickly proved to be open to many opinions and sectors, which made him a relatively popular figure, especially outside Likud ranks.

Saturday’s incident was far from his first run-in with the law. Glick gained prominence through decades of struggles for Jewish prayer rights at the Temple Mount, Judaism’s holiest site. It is also the third-holiest site for Muslims, who refer to it as the Al-Aqsa Mosque compound or the Noble Sanctuary and many of whom reject the notion that it is holy to Jews. Jews are currently allowed to visit the site — during limited hours, on a predetermined route and with heavy restrictions — but not pray or display religious or Israeli national symbols. 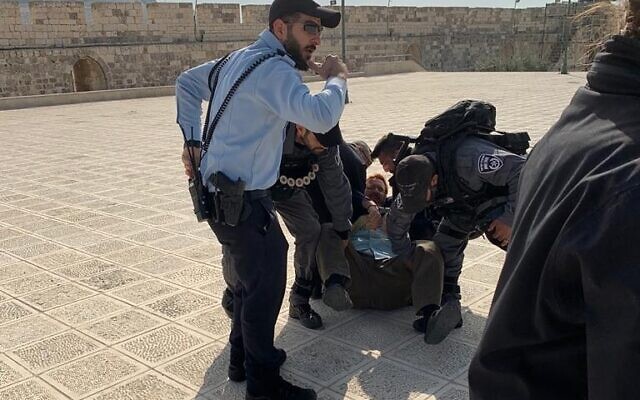 Former Likud MK Yehudah Glick is arrested on the Temple Mount in Jerusalem on February 18, 2020. (Courtesy)

Glick has often visited the Temple Mount, protested near it, launched hunger strikes and quarreled with police and law enforcement bodies. He has been barred many times from the site for weeks or months at a time.

He says he seeks Jewish-Muslim coexistence at the site, without limiting Muslim entry or prayer.

He is nevertheless viewed as an extremist by many Palestinians, and incitement against him almost cost him his life in 2014 at the hands of a member of the Palestinian Islamic Jihad terror group, who shot him at close range following a conference in Jerusalem. Glick was critically injured but made an unlikely full recovery.

He was again assaulted last year while paying a condolence visit to the East Jerusalem home of the family of Iyad Halak, a disabled Palestinian man shot dead by Border Police officers who say they mistook him for an attacker.

You’re serious. We appreciate that!

We’re really pleased that you’ve read X Times of Israel articles in the past month.

That’s why we come to work every day – to provide discerning readers like you with must-read coverage of Israel and the Jewish world.

So now we have a request. Unlike other news outlets, we haven’t put up a paywall. But as the journalism we do is costly, we invite readers for whom The Times of Israel has become important to help support our work by joining The Times of Israel Community.

For as little as $6 a month you can help support our quality journalism while enjoying The Times of Israel AD-FREE, as well as accessing exclusive content available only to Times of Israel Community members.

TSMC, Foxconn say they are in process of signing deal for BioNTech COVID-19 vaccines

Looking for St. Mark’s Square? You May Find Yourself in a Shipyard Instead